Greenplanet Energy Analytics is pleased to provide an interim web page for this ACFN announcement.
For more about ACFN, go to acfn.com.

On a cold, blustery day in November, leadership from the Athabasca Chipewyan First Nation travelled to southern Alberta to the Coaldale Solar Farm to launch one of the most significant First Nations solar projects in Canada. ACFN, through its company ACFN Green Energy LP, has a 50 per cent ownership stake with Concord Green Energy in three large merchant solar farms in Monarch, Vulcan and Coaldale, Alberta.

Together the three solar farms consist of more than 236,000 solar modules and will produce enough electricity to power 10,000 homes in Alberta.

ACFN first dipped its toes into the renewable energy industry when it joined forces with the Mikisew Cree and the Fort Chipewyan Métis to form Three Nations Energy and build the 2.3 megawatt solar project in Fort Chipewyan, Alberta. It provides 25 per cent of the electricity to Fort Chipewyan and reduces the amount of diesel trucked to the community used to generate electricity.

This project is 30 times larger than their project in Fort Chipewyan.

Solar energy is now the cheapest way to produce electricity and it’s actually helping reduce the price of electricity.

These three projects in southern Alberta represent the largest First Nations ownership stake in a renewable energy project in Canada. After many years of work on the project, Chief Allan Adam was amazed as he gazed across the almost 80,000 solar modules at the Coaldale solar farm where the ceremony was held.

Chief Adam told the dignitaries that gathered for the launch that once the ACFN Council got behind the project “there was no looking back.”

“We look at climate change as a big effect that’s going to impact a lot of people and not only the First Nations,” says Chief Adam.

“We want to diversify from the oil sands to renewable energies,” says Chief Adam adding that it’s the way of the future.

ACFN Chief Allan Adam and Councillors Flossie Cyprean and Teri Villebrun were there with their partners from Concord Green Energy (based in Vancouver), members of the Blood Tribe, on whose territory the solar farms were built, and other dignitaries to officially open the solar farms. Members of the Blood Tribe were employed in the construction of the solar projects, providing 50 per cent of the labour. Levi Little Moustache said his people appreciated the work and looked forward to future work maintaining the solar farms and new training programs for their people. Several Indigenous subcontractors also contributed to the success of the project.

“The future looks bright for us,” says Chief Adam. “We continue to build our nation based on what we see out there for the betterment of future generations to come. And there is no better way to do it than having a solar farm because: The sun is there. The sun is hot, it’s bright and it’s beautiful and it gives us life.”

The projects represent the largest investments for ACFN to date.

With the 2023 completion of battery storage now under construction, the three facilities will capture about 26 GWh of electricity annually increasing the renewable energy benefits of the project. Additional information about the project’s storage capabilities will be announced this spring.

ACFN, including Councillor Tim Flett, recently visited Vancouver to discuss their plans for renewables and the possibilities of future business collaborations with Concord Pacific.

“Traditionally, the sun gives us the food on your table, the vegetables, the fruits and everything”, Chief Adam says. “And now the sun is producing clean electricity for ACFN and the Alberta electricity grid and ACFN owns half of the project which will provide economic benefits for the nation for at least 25 years.”

ACFN and its solar projects were featured in this Green Energy Futures video story and on the CKUA Radio Network across Alberta. ACFN completed a Green Energy Business Investment Strategy in 2018 as part of its sustainable community energy and economic development planning and has been working actively with Concord since January of 2020. To accomplish this, ACFN created a new green energy business company – ACFN Green Energy LP – to hold its interests in the venture.

Chief Allan Adam explained “We dipped our toes in the green energy business with our Three Nations Energy Fort Chipewyan Solar Farm (together with ATCO, Mikisew Cree and Fort Chip Metis 125). It will provide most of our community’s power in summer and a quarter of our total electricity needs over the year.”  Chief Adam stressed “we also have to walk the talk on environment and climate protection in our business activities. ACFN wants to be a leader in helping Alberta and Canada protect climate. Solar is now one of the cheapest and best choices for power and this business venture lines up with our environmental responsibilities and values.”

The Portfolio includes the Coaldale Solar, Vulcan Solar and Monarch Solar Farms, all located southeast of Calgary. These are “merchant power” plants selling into the AESO administered market without long-term power purchase agreements. The three sites produce about 140,000 MWh of clean, renewable, low carbon electricity for sale each year.  The total project capital cost of about $140 million CDN includes a substantial overbuild of PV capacity for revenue optimization as well as provision for easily adding Battery Energy Storage Systems.

Concord Green Energy, a wholly owned subsidiary of Vancouver-based Concord Pacific are an experienced and successful wind, solar and hydro power developer and operator in BC, and Ontario. Terry Hui, Concord Pacific President and CEO said, “Concord has more projects in the pipeline in Alberta, but these mark Concord Green Energy’s first projects in the ground. We are excited to be further building our renewable energy portfolio and, in particular, to be working with Athabasca Chipewyan First Nation.” Terry Hui continued, “We look forward to expanding our portfolio in this market with the ACFN and others who share their commitment to climate action and renewable energy.”

Jason Schulz, E.D. of ACFN Strategic Advisory Services and Director of ACFN Green Energy emphasized “Clean renewable electricity is now a least-cost option for Alberta consumers. It also helps Alberta’s petroleum industry lower their carbon footprint and stay competitive in a world that cares about climate change. The green energy business portfolio is a priority for us to ensure ACFN develops sustainable and just revenue streams for the future. We appreciate the spirit of partnership that Concord brings to this venture.”  ACFN is also implementing more than a dozen clean energy projects locally in Fort Chip including hydroponics food production, residential energy efficiency, biomass heating, and off-grid solar for member cabins out on the land.

About ACFN:   ACFN, the Kai Taille Dene, have resided in and around the Peace Athabasca Delta and Athabasca River region for thousands of years and signed Treaty 8 in 1899.  ACFN has a registered membership of approximately 1200 people, about 1/3 of whom live in the hamlet of Fort Chipewyan, with significant numbers also in Fort McMurray and Fort Smith.  ACFN wholly owns ACDEN, one of Alberta’s major energy service companies supporting the Canadian oilsands, as well as a number of other successful large-scale business ventures.

About Concord Pacific / Concord Green Energy: Concord has been building Canada’s largest lifestyle-forward urban communities for over 30 years. Concord Pacific Place in Vancouver and Concord City Place in Toronto are the country’s two largest urban masterplans. Concord recently also expanded to Seattle’s tech hub in the US and to London, UK with the Principal Tower. The company’s renewable energy arm, Concord Green Energy, has active hydro, solar and wind projects of scale in British Columbia, Saskatchewan, Ontario and soon to be in Alberta. 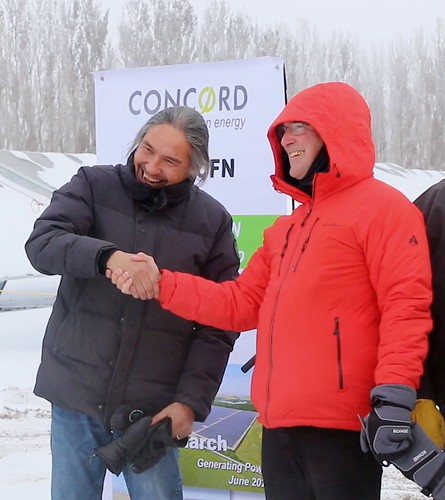 Photos
for the Media

CHECK BACK for additional images and news about the Coaldale Solar, Vulcan Solar and Monarch Solar Farms.